“Attention to detail at the refurbishment of one of Scotland’s luxury hotel’s is key,’ says project manager Gary Moore.

NIXON’s latest project is the completion of the refurbishment of 8-bedroom suites at Cornhill Castle Hotel in Biggar.

The Castle on the Clyde is nestled in the Scottish countryside and enjoys panoramic views over Scotland’s stunning scenery. Owned and managed by Manorview Hotel & Leisure Group, the hotel has rested here since 1851 and recently underwent refurbishment of 8 of its bedroom suites.

Steeped in history, architect William Leiper, the designer of Glasgow’s Downhill Church and the Templeton on Glasgow Green, constructed Cornhill.

The hotel is popular for weddings, mini-breaks and luxury stays and closed for a period of six-month to undergo restoration.

NIXON was proud to be appointed again by Manorview Group to lead as the Principal designer, Project Managers and Quantity Surveyors of the refurbishment of its luxury suites.

The suits were lovingly restored and upgraded and all were fittingly named after Scottish Castles.

Each was refurbished to exceptional standards and in keeping with the traditional setting, antique brass bed frames and ornate light fittings were incorporated into the refurbishments. Patina leather furniture was incorporated into the upgrades to complement the style of the hotel as well as careful restoration of sash and case windows and the reintroduction of Victorian-iron radiators.

NIXON’s Gary Moore, said: “Attention to detail at the refurbishment of one of Scotland’s beloved luxury hotel was key and we worked with teams of professionals to ensure that the hotel’s suites were preserved and upgraded to exceptional standards. We were delighted to hand the hotel back over and to see guests enjoy the restoration in time for winter breaks.”

Dennistoun is the 8th coolest place to live on the planetPress Releases, Uncategorized 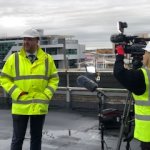 STV visits Lancefield Quay apartmentsPress Releases, Uncategorized
We use cookies to ensure that we give you the best experience on our website. If you continue to use this site we will assume that you are happy with it.Ok